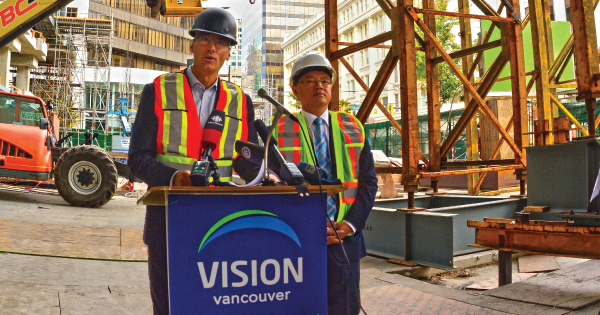 “We’ve seen an incredible growth in local tech companies and in some of the big players globally coming to Vancouver and building significant operations — that’s where we’re focusing our attention to make sure we capitalize on a global opportunity to diversify our economy.”

While the provincial government can advocate for B.C.’s mining and energy sectors that it regulates, Robertson said his party would create a roundtable forum for representatives of major tech firms to speak directly with city staff to solve logistical barriers, such as access to parking, that they face in Vancouver.

Robertson also reiterated his party’s commitment to continue the Vancouver Economic Commission’s involvement with venture capital funding for start-ups in the face of NPA candidate Kirk LaPointe’s criticism last week that it should instead focus on attracting private-sector investment in resource-sector businesses that create high-paying jobs.

Vision held Sunday’s news conference on the first floor of the $750-million Telus Garden tower, which is set to open as early as December and will house a satellite office of Internet shopping giant Amazon.

Robertson said the tower would contribute $8 million to $10 million a year in taxes to the city and touted it as one of seven commercial buildings under construction this year that will help alleviate downtown Vancouver’s tight market for office space. Robertson also stated that any increase to its property tax rates — which he said are the lowest in Canada — would be tied to inflation and that under Vision the city has reduced its debt by $191 million since 2009.

The party’s economic plan also includes a proposal that would prevent builders of large developments from building big-box retail spaces in favour of smaller parcels of retail space that could sustain independent local businesses able to pay the lower rents.

Vision’s plan also called for a “reimagining” of downtown Vancouver’s Robson and Granville streets to make those areas more walkable and enjoyable for tourists after the Vancouver Art Gallery moves to its future home at the intersection of Cambie and Georgia streets.