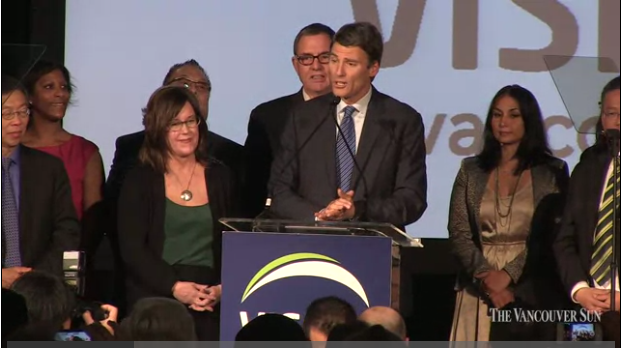 Voters not swayed by negative tone between front-runners

Vancouver voters worried less about personality and more about policies and ideas when it came to choosing the city’s mayor, according to an exit poll.

More importantly, it appears most voters decided early in the campaign who should run the city and were not swayed by the deeply negative tone near the end between front-runners Gregor Robertson, of Vision Vancouver, and the Non-Partisan Association’s Kirk LaPointe.

According to the exit poll, done for The Sun by Insights West, 74 per cent of voters knew who they would support more than a week before the election. Few were swayed by Robertson’s apology and his pledge to be a kinder, gentler mayor when trying to nudge the city in the direction of his green and housing agendas. The poll found only 10 per cent of respondents were influenced by the apology.

Voters were most concerned about the main election issues of transportation, pipelines and housing rather than allegations of corruption, the resulting defamation suit or the fact that LaPointe lives at UBC, which is technically outside Vancouver.

The exit poll of 455 voters also validated a concern that many feel alienated from their civic government and that they want Robertson’s administration to pay more attention to neighbourhood and park issues.

That message was sharply delivered in Saturday night’s election, where voters clipped Robertson’s wings a bit, electing him to a third term but with a reduced majority on council and loss of majority on both park and school boards. Their message: listen more, pay sharp attention to neighbourhood concerns and don’t push too hard too fast. LaPointe fell far short of his challenge for the mayor’s chair but his party made impressive gains, climbing to 11 members on council, park and school boards from seven in 2011. Significantly, the NPA now holds power on the park board, which has been embroiled in political fights over the control of community centres and the future of the Vancouver Aquarium.

The story for the Green party of Vancouver is even more telling. Coun. Adriane Carr, who barely squeaked over the line in the last election, topped the council poll this time and also brought three Greens with her to park and school board. For the first time in Canadian history, a Green, Janet Fraser, holds the balance of power on an elected board. As a newly-elected school trustee she sits on a board split equally between Vision and NPA.

The exit poll showed Robertson’s supporters were not swayed by personality but by ideas, and to a lesser extent by change, according to Mario Canseco, a pollster for Insights West. On the other hand, LaPointe’s supporters were motivated by the desire to topple the mayor, he said, and not so much by his ideas and policies.

Canseco said the exit poll revealed Robertson lost a third of the vote he received in 2011 to LaPointe (22 per cent) and Coalition of Progressive Electors’ Meena Wong (11 per cent). But almost half of “new” municipal supporters chose him over LaPointe.

“Ultimately, Robertson gets a larger share of the people who didn’t vote in 2011, whether it was people who stayed at home then or who are first-time voters now,” Canseco said.

The results came amid the best electoral turnout since Larry Campbell swept into power in 2002 with votes from half of all eligible voters. This time, turnout was nearly 44 per cent, well up from the 35-per-cent turnout in the 2011 election.

While voters clearly wanted Vision returned to power, a look at poll-by-poll results shows the party’s share of the vote went down in every neighbourhood of the city even as the majority elected them to office.

Not surprisingly, the biggest drops took place in neighbourhoods dissatisfied with the Vision council’s planning and development agenda. In Strathcona, the drop was 12.4 per cent; in Grandview-Woodland, where residents were enraged over a plan for towers at Broadway and Commercial, Vision lost 10.6 per cent of its voters. In Marpole and South Cambie, where the city had to back off plans to convert single-family neighbourhoods to townhouses, the drop was just under 10 per cent.

Robertson addressed that point on Saturday after an acceptance speech in which he acknowledged his renewed majority on council comes with strings attached.

“It was really about reaching out to voters and making sure people know we are learning and growing, that we reflect all the voices of Vancouver and that people feel heard,” he said. “I certainly see that a priority over the next four years, and with more diverse voices around council, park board and school board tables, it is important that we make sure all of Vancouver is included in tough decisions.”

However, he also said voters have endorsed his policies on affordable housing, transportation, housing the homeless and fighting off Kinder Morgan’s plans for a twinned pipeline. His immediate first job, he said, was to press hard to get homeless people out of the cold this winter.

The poll-by-poll story wasn’t much better for the NPA, which failed to capitalize on voter dissatisfaction with Vision. Overall, it captured only 41.1 per cent of the vote, a mere half point over what Suzanne Anton gathered in her failed 2011 run for mayor. The NPA’s actual share of votes dropped slightly in eight neighbourhoods and it picked up only small increases in South Cambie and West Point Grey. Significantly, it lost a share of votes in key east Vancouver neighbourhoods where Vision also had trouble.

The beneficiary clearly was COPE, which made double-digit gains in many east side neighbourhoods but still could not get a single person elected to council, school or park board. Wong’s 9.4 per cent of votes appeared to come almost exclusively from Robertson’s camp.

When looking at the average vote share per slate, a review shows that Vision’s council candidates took a big hit, dropping from an average vote share of 40.8 per cent in 2011 to just 31.8 per cent in 2014. Even when Vision candidates won this time out, they did it with a lower share of the vote than last time, such as Heather Deal, who topped the Vision slate this year with 34.5 per cent of the vote, well down from the 42.4 per cent she got in 2011.

In the exit poll — which had a margin of error of plus or minus 4.6 per cent, 19 times out of 20 — transportation topped the issues, with 33 per cent of all voters, and 41 per cent of decided Robertson voters, saying it had a significant impact on their decision. On the issue of Kinder Morgan’s pipeline, 30 per cent of all those polled, and 44 per cent of Robertson’s voters, said it influenced how they voted.

LaPointe’s main platform issue of transparency and openness also ranked high: 28 per cent for all polled, and 49 per cent for LaPointe followers. Surprisingly, housing ranked lower as an influence: 27 per cent overall, and 31 per cent among decided Robertson voters felt it swayed their vote.

As for those campaign ads both parties ran? It appears it wasn’t money well spent. Only six and five per cent said their vote was influenced by NPA and Vision advertising, respectively.

“I think the message from the voters is consistent with the apology the mayor gave in the last week of the campaign. He realized he has pushed too hard, he hadn’t listened well enough,” Smith said. “The proof is in the pudding as to whether he will be more sensitive to public opinion,”

Vision Vancouver Coun. Andrea Reimer said she was not at all surprised over the Insights West exit poll or the actual election.

“It pretty much was what we were seeing. There were two messages. One was that this was a very strong mandate for Vision’s policies,” she said. “The other was that there was a clear message while people support the direction we are going they expect us to dig deeper and find a way to bring more people into the conversation.”

On council, Vision lost incumbent Tony Tang but a last-minute campaign to support Geoff Meggs got him over the line in 10th spot. Melissa De Genova, a former NPA park board commissioner, joined NPA incumbents Elizabeth Ball and George Affleck on council.

Trevor Loke, the incumbent Vision park board commissioner, lost his job. So too did Vision school board trustees Ken Clement and Cherie Payne and Rob Wynen.

Although Vision school board chair Patti Bacchus topped the polls, her party holds only four positions, including incumbents Allan Wong and Mike Lombardi. They face incumbent NPA trustee Fraser Ballantyne and newcomers Penny Noble and Stacey Robertson, along with former NPA park board commissioner Christopher Richardson. Green’s Janet Fraser holds the balance on the nine-member board.