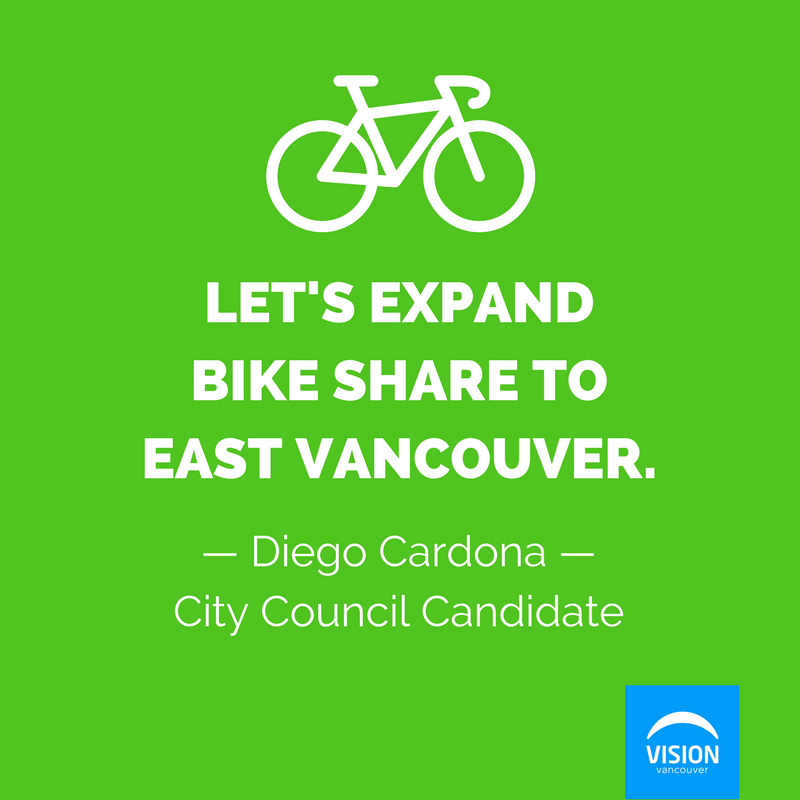 Vision Vancouver’s candidate for City Council today announced that, if elected, he will be a vocal champion for expanding the Mobi bike share service to East Vancouver.

“Mobi has been an incredible success for our city,” said Cardona. “With more than one million kilometres travelled during the first year alone, it’s clear that Vancouverites are using Mobi as part of their daily transportation routine. Let’s get this service expanded to East Vancouver, so people in places like Strathcona, the new Emily Carr campus, and the busy transit hub at Commercial and Broadway can also enjoy the convenience, environmental impacts, and ease of bike sharing.”

Launched last year, Mobi has been a welcome addition to Vancouver’s active transportation network, averaging between 2,500 and 3,000 trips per day. The Mobi bike share system was introduced by the Vision Vancouver-led City Council, and was opposed by Non Partisan Association (NPA) Council members.

“I fully support Diego’s commitment to expanded bike share service in the city,” explained Mayor Gregor Robertson. “Bike sharing makes life easier — and healthier — for Vancouver commuters, and it’s these kind of forward-looking policies that separate Diego from the NPA’s candidate in this campaign.”

Mobi, Vancouver’s public bike share system, currently extends from Arbutus Street to Main Street. An update to City Council on potential next steps for Mobi is expected before the end of the year.

The NPA’s candidate for the October 14 by-election is a former oil and gas lobbyist, BC Liberal staffer, and failed BC Liberal candidate in New Westminster.