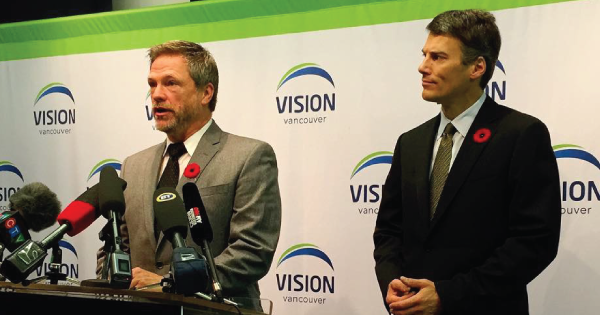 The time to choose Vancouver’s Mayor and City Councillors for the next four years is fast approaching: November 15 is voting day. When I step into the booth I will, for the very first time, vote Vision Vancouver.

As a past President of the NPA, I did not decide this easily.

Back in the glory days, the NPA was a giant tent with room for everyone, from one of North America’s first out gay politicians Gordon Price, to conservative law and order councillor Lynn Kennedy.

The NPA has moved further and further to the right, a monochromatic party of angry people afraid of losing what they have.

It’s not so much that I left the NPA as the NPA left me.

The breaking point for me came when two of their school trustees were caught on video scaremongering for votes against anti-bullying regulations—and the party did nothing.

Now, they don’t even have an open nomination of candidates. NPA Mayoral candidate Kirk Lapointe and his council candidates were anointed in a closed-door congregation. Their qualifications are unknown, their promises unheard. Who knows what was said?

This is a contrast to Vision Vancouver. It is a raucous, boisterous cacophony of a party. With every age; every ethnic group in our Vancouver cosmolopolis; straight people and LGBTQ, all jostling side-by-side.

There are new ideas on how to make the city better, to make it work for many, to house a few more, to change the way we see our cars and our lives within and around them, new thoughts on diversifying our economy, on community gardens, on rental housing, on protecting our shorelines, on area plans and town hall consultations.

Treacherous waters these, with dangerous risks. It is hard to experiment and easy to ridicule in our shallow political discourse, but essential if we are to leave any kind of city—any kind of world—to our city’s children.

Many of those conversations influence strategies and are seeping into the bureaucracy. Those strategies become the guiding documents and are developed into tactical plans. Now we see some bearing fruit, some wins, some moving of the bar.

We see Vancouver leading some of the conversations that we desperately need to have. They irritate and frighten people because they mean change, they are inconvenient, and not all of them work out or are efficient. But they move us forward. They make it a bit better.

So when I pull my head out of the muck that the parties and the media make of our elections, when I think about where we have been and where we are trying to go—the things that are important to me—I find that I agree with most of the things Vision Vancouver, Gregor Robertson and his council candidates are trying to do.

I will support those who have such an obvious passion for our city, with all its possibilities, challenges and opportunities.

I will vote Gregor Robertson and Vision Vancouver.