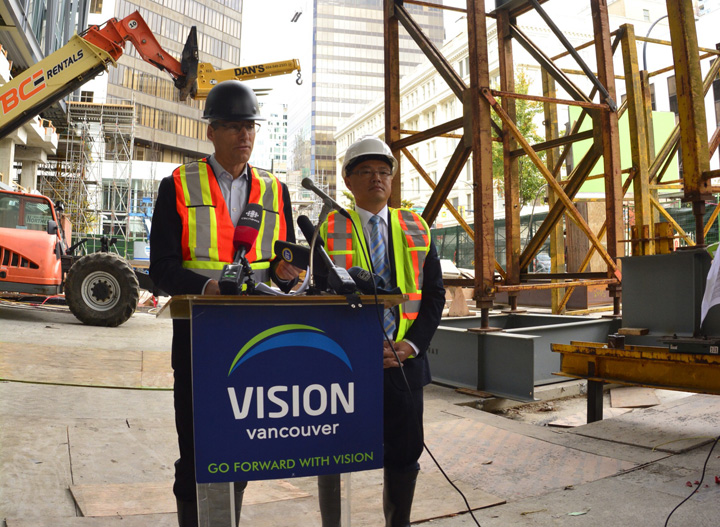 “Vancouver’s economy is strong, diverse, and growing, and we need to keep it moving in the right direction,” said Mayor Robertson. “I’m proud of the role we’ve played in this success. We’re seeing big investments in our downtown, homegrown companies succeeding, and newfound confidence in our economy.”

Robertson pointed out that, under Vision’s leadership, Vancouver has the lowest property taxes of any major city in Canada, and has reduced its debt by $191 million. There are also a record seven new office towers under construction in Downtown Vancouver.

“Business is booming, and the construction of new office buildings like this one is literally a concrete example of Vancouver’s economic success,” said Robertson. “But this didn’t happen by accident. Vancouver needs a City Hall that takes care of the basics, and lays the groundwork for a stronger economy. That’s what Vision has done, and we will continue to do.”

Over the next four years, Robertson promised to continue his focus on strengthening local businesses and building on the success of growing sectors like technology, tourism and digital media.

“Vancouver has established itself as a tech start-up city, with rapid growth fueling new jobs and companies in Vancouver. That’s why local companies like Hootsuite have been able to become global competitors, and international companies like Microsoft and Sony Pictures Imageworks want to grow here,” Robertson said.

“I’m proud of our economy, and confident of the direction it is headed,” added the Mayor. “But there is a risk in this election. City Hall should be our local economy’s biggest booster, but all we’ve heard from the NPA is negativity and doubt, and an inexperienced team with no business experience.

“With Vision, we have a clear plan on the economy that’s in contrast to an inexperienced, out-of-touch NPA.”

Growing an economy for all of Vancouver

Vision has steered the City’s budget through an economic downturn while maintaining crucial services and keeping taxes low. We will:

Vancouver has established itself as a tech start-up city, with rapid growth fueling new jobs and companies in Vancouver. Over the next four years, Vision Vancouver will:

Enable success for small business and our local economy:

Vancouver’s economy is thriving, but we need to do more to support locally owned businesses and protect the unique culture of our neighbourhoods. Vision Vancouver will:

Champion tourism and our downtown:

We believe it’s time for a comprehensive, long-term vision for Vancouver’s downtown, one driven by the ideas of local residents to establish our downtown core as a world-class destination on par with major cities around the world. Vision will: